The Artesian is beloved for its appealing blend of size, atmosphere, amenities, and access. It is booked for hundreds of events each year – everything from book launches to modern dance performances, weddings to retirement parties.

The facility – once the Calvary Evangelical Church – was originally designed and built by famed Saskatchewan architects Storey and Van Egmond. It has graced the corner of 13th Avenue and Angus Street for over 65 years.

Solidly built and lovingly cared for, the building was updated and modernized many times over the years. So much so that when the building was privately purchased in 2009 the interior bore little resemblance to the original design and much of the charm was lost. With a vision to create a multipurpose performing arts space for the local community, the owners began an extensive restoration of the facility and, in 2011, the Artesian formally opened for rentals.

The Artesian has since seen hundreds of music, theatre, film, comedy, and community events through its doors. Roughly 16,000 people come through the space every year. The facility has a reasonably sized proscenium stage (once the church altar), a 30-foot by 30-foot sprung hardwood dance floor, and comes equipped with professional audio and lighting systems. Seating on the dance floor is flexible, so the room can assume a variety of configurations – proscenium, thrust, cabaret, and gallery. The church basement has been transformed into a retro-inspired lounge and bar. At capacity, the main room can seat 175.

The Artesian is one of the few performance spaces in Regina that is wheelchair accessible.

Operating as a for-profit rental space, the Artesian was a break-even endeavor. Run by the Artesian Arts Company, it proved its sustainability but never had any capacity to grow, or realize its potential. Though intended as a space for community arts and cultural engagement, the rental rates were more than many local groups could afford, and the venue often sat empty.

In the summer of 2016, a change in ownership presented the opportunity to reinvent the Artesian, to put a non-profit organization at its helm and better serve our local arts community. This is the role that Artesian Performing Arts has assumed – to be a destination for new work development, to be a champion for the emerging artist, and to provide facility, production, and marketing support to the performing arts community in Regina.

Even as rental facility, the Artesian Arts Company dabbled in presentation, and sought nationally recognized artists and award winning shows for the Artesian stage. These included a Comedy Night with Kids In The Hall Alumni Kevin McDonald, a 2-Night run of the stage version of CBC’s This Is That, and a 3-Night run of 2b Theatre’s The God That Comes (featuring Hawksley Workman).

We consistently present a strong concert series to the Artesian stage. The venue has been praised as “one of the best live music venues in Canada”, and has hosted Canadian greats like Martha Wainwright, Sarah Slean, Steven Page, Ashley MacIsaac, Hayden, and Royal Wood while continuing to support local talents like Belle Plaine and Blake Berglund, Andy Shauf, Indigo Joseph, and The Lazy MKs.

Artesian Performing Arts proudly supports the Saskatchewan Safe Venue Initiative declaring that “No Sexism, No Racism, No Violence, No Homophobia, No Transphobia, and No Hate” will be tolerated at our facility. 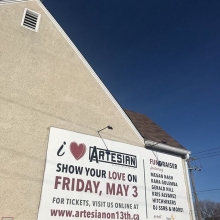