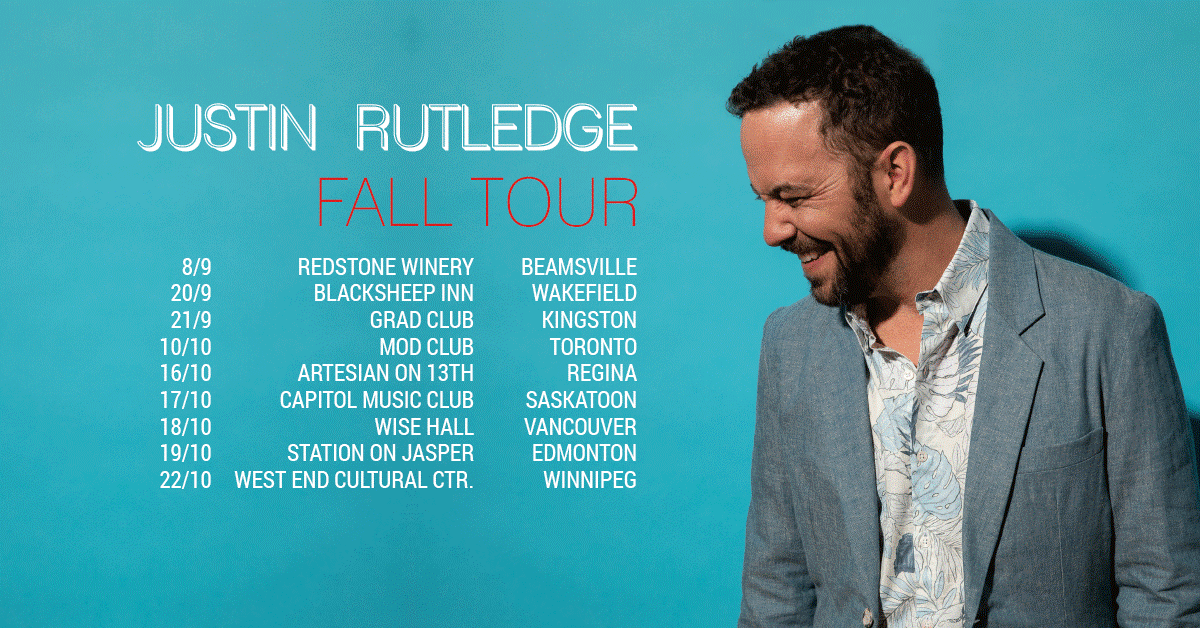 The Artesian is pleased to present Justin Rutledge on tour in support of his new album "Passages," with support from Charlotte Cornfield!

Justin Rutledge’s albums garner impressive amounts of critical acclaim. Between his debut, No Never Alone (2005), his sophomore release, The Devil On A Bench In Stanley Park (2006) and third album, Man Descending (2008). His fourth album Early Widows was named one of the top 50 albums of 2011 by Amazon.com Rutledge has earned 2 Juno nominations, a Galaxy Rising Star award, countless year-end critics’ picks, the title of Toronto’s Best Local Songwriter (NOW Magazine), a spot on the 2008 Polaris Prize Long List and a Canadian Folk Music Award nomination. Justin has shared the stage with artists such as Blue Rodeo, Dolly Parton, Martha Wainwright and Great Lake Swimmers.

No Never Alone will be available on vinyl for the first time on October 9 and available as deluxe bonus re-issue online beginning September 25th. The brand new album "So Many Sparrows" will be released in early 2013. Check www.justinrutledge.com for more information

“You free yourself when you take away the script,” says Toronto songwriter Charlotte Cornfield. “That’s where this record came from, dismantling patterns and embracing the process.” Cornfield’s third full length, The Shape of Your Name, is set to arrive in Spring 2019 via Outside Music imprint Next Door Records. The album has a more honed studio sound than her scrappier 2016 release Future Snowbird, and for good reason: it was recorded in 5 different sessions over the course of 3 years. The songs are her strongest and most striking to date - contemplative and contemporary, funny and heart-wrenching - and they’ve got that stuck-in-your-head-for-days quality that Cornfield is known for. The Shape of Your Name features a star-studded cast of collaborators including (but not limited to) Grammy-winning engineer Shawn Everett, Broken Social Scene members Brendan Canning, Kevin Drew and Charles Spearin, and Montreal songwriter Leif Vollebekk.

“My initial intention wasn’t to make a record at all,” Cornfield muses. “The whole thing kind of happened by accident. I went to The Banff Centre to do a residency and came out with these recordings that I knew I wanted to use for something but wasn’t sure what.” She brought the unfinished songs to her former roommate Nigel Ward in Montreal. “He fell into the producer role seamlessly,” says Cornfield. “We took it slow and just tried things for a while until the vision settled in. There was no rush. It was freeing, and it gave the songs a lot of breathing room to develop.”

For the past four years Cornfield has been booking and managing Burdock Music Hall, a small venue in the west end of Toronto. The job has offered her stability and a strong sense of place in Toronto’s bursting-at-the-gills music community. She’s also an in-demand drummer and side musician, and has worked closely with Tim Darcy of Ought, Molly Burch, Adrian Underhill, and members of Lake Street Dive. She has toured extensively in North America and Europe and has supported a huge range of artists including Broken Social Scene, Anais Mitchell, Daniel Romano and Sam Amidon.