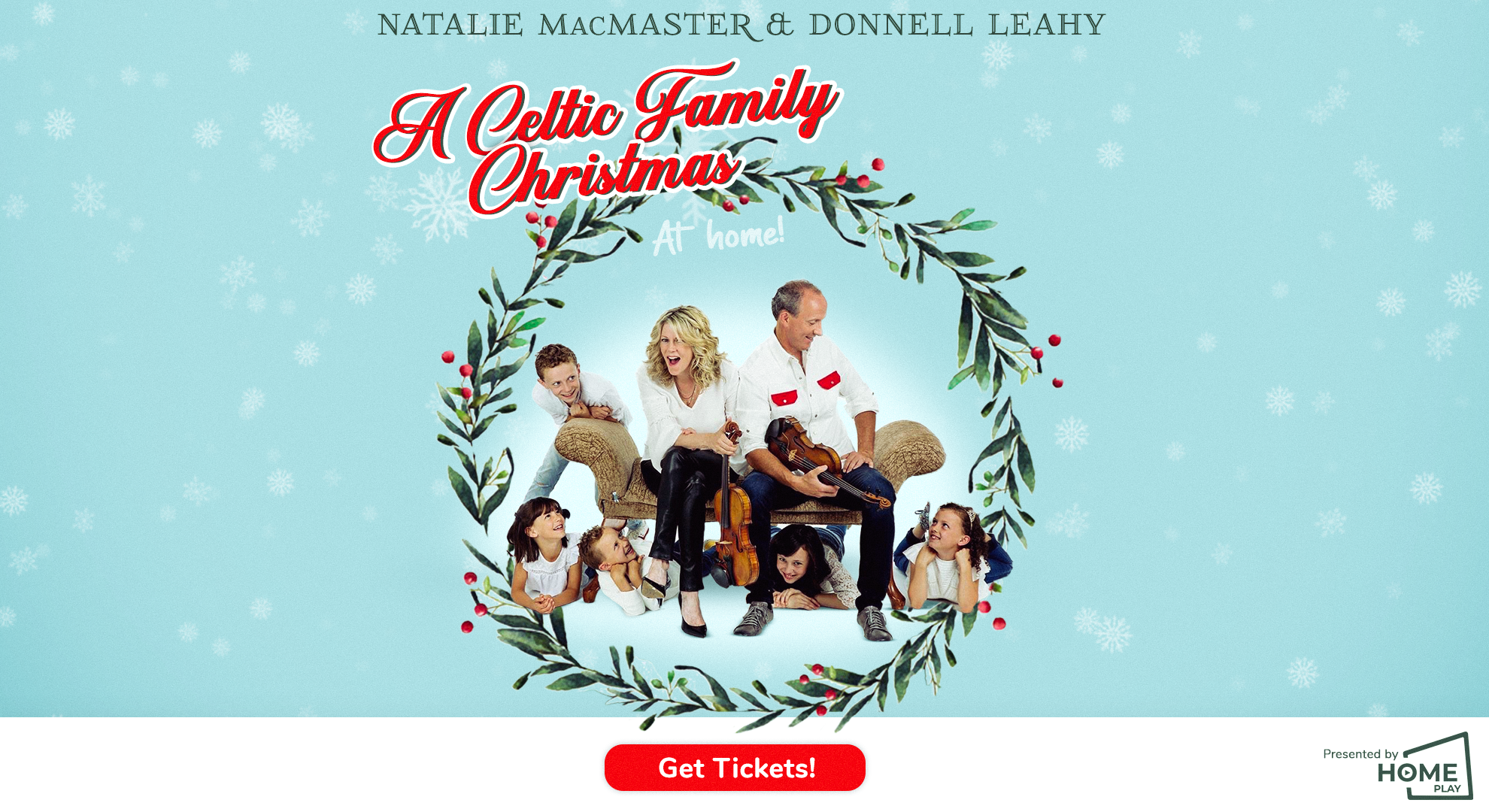 Although the venue is still closed to the public, The Artesian is pleased to have the opportunity to present a very special Celtic Christmas presentation featuring Natalie MacMaster and Donnell Leahy on December 11th, 2020! This event will stream directly to your home so you can enjoy a bit of seasonal joy safely with your loved ones!

How to watch the show:

1. Buy your ticket via the "Tickets" link above.

2. You will be able to test your system after purchasing a ticket by watching a placeholder promo video.

3. You will also be able to register with the HomePlay.Live network which allows you to protect and retrieve your ticket, if you lose your confirmation email.

4. On December 11th, 2020, go to the Artesian page on HomePlay.Live and click on the video where you will be asked to either provide your code. Click here to go to that page!

Note: It is highly advised that you purchase at least a week prior to show time, to be sure your computer/television is set up correctly. HomePlay and the Artesian do not provide technical support for in-home troubleshooting.

A note from Natalie MacMaster and Donnell Leahy:

Here we are celebrating another Christmas and isn’t each one so unique. I always remind myself every year that Christmas doesn’t need to be what it once was because as humans, we are ever-growing and evolving and so too will our experiences. But music has always been and always should be an important part of the season. For Donnell and I, Christmas has always given us beautiful moments and memories. And now as parents, we hope to help create the same for our children in our own way.

We hope you enjoy our brand of holiday music. We absolutely had a glorious time creating it with our favoured musicians who did a delightful job. And as for this time of year, my hope for our family and yours is that we all get a moment to stay still long enough to feel the love, peace and joy that Christmas can bring. May we recognize and cherish the treasures we have in this world and may we share our own abundant gifts. And for us, that is the music you are about to hear.

Merry Christmas to you all!
Love Natalie and Donnell

About Natalie MacMaster and Donnell Leahy:

Hearing Natalie MacMaster and Donnell Leahy speak reverentially about the fiddle, which has propelled their dazzling careers since childhood while cementing their status as Canada’s reigning couple of Celtic music, is almost as electrifying as hearing them play it.

Indeed, when MacMaster and Leahy married in 2002 — both were already stars in their own right — they could not have predicted their merger would recast what contemporary musical success looks like. Or that they would produce a large family and ensure their mantelpiece was jammed with JUNO and
East Coast Music Awards while creating an inventory of achievements spanning the globe.

They certainly couldn’t have imagined capping off what they jokingly refer to as their combined 83 years as performers with milestones including another hotly anticipated Christmas tour, an accompanying TV special, a pending third instalment of their Greenbridge Celtic Folk Fest, a recent Road Gold Award from the Canadian Independent Music Association, and last but certainly not least, the arrival of Maria, newest sib to Mary Frances, Michael, Clare, Julia, Alec and Sadie.

“I’m continually amazed by what the fiddle has brought to my life,” MacMaster offers. “It has carried me through my childhood, through my teens, my young adult life, my married life and now motherhood. And I still love it as much as ever. Same with Donnell. It’s unexpected and awesome.”

Though MacMaster and Leahy followed different trajectories to this point — she a Cape Breton native who could step-dance before she could walk, he the oldest brother of acclaimed family group Leahy — both have confidently crested the traditional music peak.

Their synergy was brilliantly showcased on the pair’s first recorded collaboration, 2015’s Bob Ezrinproduced album One, a crowning achievement complementing combined album sales of over one million, a CV listing cellist Yo-Yo Ma, bluegrass star Alison Krauss, and banjo ace Béla Fleck as past collaborators (and Shania Twain and The Chieftains as fans) plus a devoted audience stretching from Sydney, Nova Scotia to Sydney, Australia.

“The fiddle was definitely common ground for us when we first got together,” MacMaster, a Member of Order of Canada since 2006, recalls with a chuckle. “But I was so in awe of Donnell’s family, of 11 siblings who could play and had a family band. And here I am now doing almost exactly the same thing. Well, kind of.”

MacMaster is referring to her and Leahy’s seven gifted children, five of whom are often the showpiece of the MacMaster/Leahy live set though not because the couple necessarily envision showbiz careers for the kids, who recently performed (actually knocked ‘em dead) on German TV variety show, Willkommen bei Carmen Nebel.

Rather, the pair realized early on that being on the road without their kids was infinitely harder than touring with them. That the children were already being home-schooled (MacMaster has a teaching degree) made enacting that decision easier.

“Initially we were reluctant to let the kids perform. We worried the expectations might be too much,” Leahy says. “But then one night we put Mary Frances on stage. Soon after that Michael wanted to play. And you must reward practice.”

When vintage comedian W.C. Fields famously quipped, “Never work with animals or children,” he clearly hadn’t seen the MacMaster/Leahy clan fiddling, step-dancing, and positively delighting audiences, something a forthcoming Christmas TV special, titled A Celtic Family Christmas (after their 2016 album of the same name) will highlight.

As Leahy explains, the family was initially pondering participation in a 13-episode docuseries. “Although we are public people, we are also very private and we were unsure about having cameras in our home and following us around. So the Christmas special is a kind of test run.”

In it, a spirited performance anchors a wider narrative chronicling the family at home, in their community, and “doing what we normally do around Christmastime.” Meanwhile, the forthcoming 24-date Celtic Family Christmas Tour — which contains a soon-to-be-revealed theatrical element that will thrillingly traverse time and continents while contextualizing the music and its players — touches down at marquee venues across Canada, confirming the duo as powerhouses on the seasonal circuit.

The TV special is also a fitting bookend to The Leahys: Music Most of All, a short by filmmaker Peter Weyman, whose vivid depiction of the touring musical sibs won an Academy Award for Best Foreign Student Film in 1985.

It’s easy to understand why Weyman — and later MacMaster — was so enchanted with the Leahys. Their rich familial history is the stuff of lore. Except it’s absolutely true.

“My father’s people came to Canada in 1825 from County Cork, Ireland where they were farmers before settling in a little town called Douro,” Leahy explains. “My father was a beef farmer, we grew up on a beef farm and it’s in our blood. Myself and two of my brothers continue to run and grow the farm.”

MacMaster and Leahy point to the 120-acres of ancestral lands in Lakefield, Ontario, as yet another key component of their children’s education and development. “Teaching can take many forms,” MacMaster notes.

Of course, the globe-trotting Leahys aren’t exactly like every other cattle farmer out there. “We put our bulls out with the cows based on our tour schedules so we can have people home for calving!” Leahy howls. “Running the farm is a great counterpoint to life on the road. Plus, we believe in work and the farm is a wonderful place for the kids to learn through their chores.”

But there’s always room for more music. Ergo, the couple’s launch in 2017 of the successful Greenbridge Celtic Folk Fest, which, for an August weekend each year, transforms the bucolic agricultural hub of Keene, Ontario into a foot-stomping, fist-pumping, string-shredding Celtic ceilidh.

“We’ve been talking about the kinds of shows we can do since we got married 16 years ago. We finally decided to start something in our backyard,” says MacMaster, who with Leahy both headlines and curates the Fest. “Plus, we wanted to bring this multigenerational, big-picture celebration of this music to an environment that would really appreciate it. The reception so far has surpassed all our expectations.”

MacMaster continues: “I started playing the fiddle when I was nine, and I never intended to make a career out of it, mostly because I didn’t think it was possible. Even the most adored fiddlers in Cape Breton had day jobs. And yet here I am.

“This whole thing — first playing music by myself, then playing music with Donnell, then touring with Donnell and the children and all of us playing music together — has evolved in a very natural way. We feel incredibly lucky to be together as a family and to be letting our children develop their musical talent.”

Adds Leahy, “The only downside is that we can’t do all we’re asked to do and might like to do in other circumstances because we are parents first. You think about touring Australia and Ireland and The Netherlands, where we’ve been invited to play. But then you remember the kids’ math homework has to get done!”

All because of fiddles. Unexpected and awesome indeed.

Natalie returns to the studio in 2019 to record a solo LP which will be co-produced by Donnell and feature the performances of Tim Edey. Natalie’s describes the artist direction of the project “I have something to say through my fiddle. It’ll be a moment of joyous appreciation inspired by years of parenting, marriage, life, friendships, and music. It is a moment during my 47th year of life, my 37th year of fiddling, my 16th year of marriage, my 13th year of parenting. I have chosen one of my very favourite musicians to join me, Tim Edey, an absolute Jen of a player and person.”